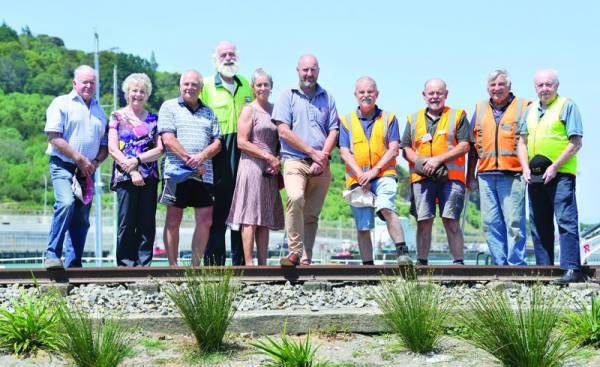 Maintenance is being done along the railway bridge by Gisborne City Vintage Railway (GCVR) to ensure Gisborne’s historic steam train continues to have somewhere to puff away.

The work is to keep tracks in quality condition and continue carrying cruise ship passengers on excursions.

The port owns infrastructure from the bridge and around the harbour.

GCVR president Geoff Joyce said for the rest of the track, an agreement GCVR had with KiwiRail meant most of the railway must be maintained by themselves.

“The big difference between this agreement and the KiwiRail agreement is that the port company has agreed to reimburse us for the work done on their section and this is very much appreciated.”

“They will ensure the long-term viability of this section of the track so it’s safe for the steam train and other trains to use now and into the future.

“Their Wa165 steam locomotive is a popular attraction with locals and tourists, so we’re delighted to be partnering with them on this ongoing project.

“In October, we contributed nearly $10,000 towards track repairs by Shed 2, and now we’ve donated several thousand dollars more for further track upgrades from Shed 1 to the bridge.

Mr Gaddum said Eastland Port would provide about $15,000 for the project.

Mr Joyce said money was an ongoing issue for the railway line which needs extensive repair work to keep the track useable.

“Under the present arrangement with KiwiRail, we have a ‘licence to occupy’ the track between Gisborne and Muriwai.

The licence, which allows them use of the track, means they are solely responsible for maintenance.

“A number of community trusts and charitable trusts have supported us over the years which has enabled us to carry out all the essential track maintenance to keep running.”

“With the support of the various trusts, we have spent around half a million dollars on track maintenance over the past three years.”

Another conundrum running a vintage steam train is the specific skills needed to operate the antique train, manufactured in Dunedin in 1897.

“The money we get from ticket sales covers the costs of the day, bearing in mind that we frequently have to fly in a driver and accommodate them.

“There are not many steam train drivers left around.

“We have about five people that drive for us, and only one of those is local and not always available.”

Mr Joyce says not only does the train need a specialised driver but also an authorised person to stoke the coal fire and look after the boiler to ensure steam is always available.

Asked about the result of the unreleased feasibility study which will decide if the line between Gisborne and Napier re-opens, Mr Joyce says he has no information.

“We don’t know which way it’s going to go.

“If KiwiRail comes back to Gisborne, obviously that would take the track maintenance issues away but would very much limit our freedom to operate.

“That would make it much easier to survive financially but Activate Tairawhiti has indicated they are very supportive if the track line does not reopen.

“As long as we can show that we’ve got a sustainable and worthwhile operation.”